Bird of the Month

Have you seen any of these birds on the Greenway? Please let us know where.

The White-breasted Nuthatch is found year round in western North Carolina and throughout much of the United States. Look for it on the greenway on large tree trunks and branches, with its gray back, black cap, and large bill.

Although it is a small bird, it has a loud nasal honk and a unique style of foraging. Nuthatches have the ability to hang upside down and walk down tree trunks.

You can attract White-breasted Nuthatches to your feeders by providing seed and suet. 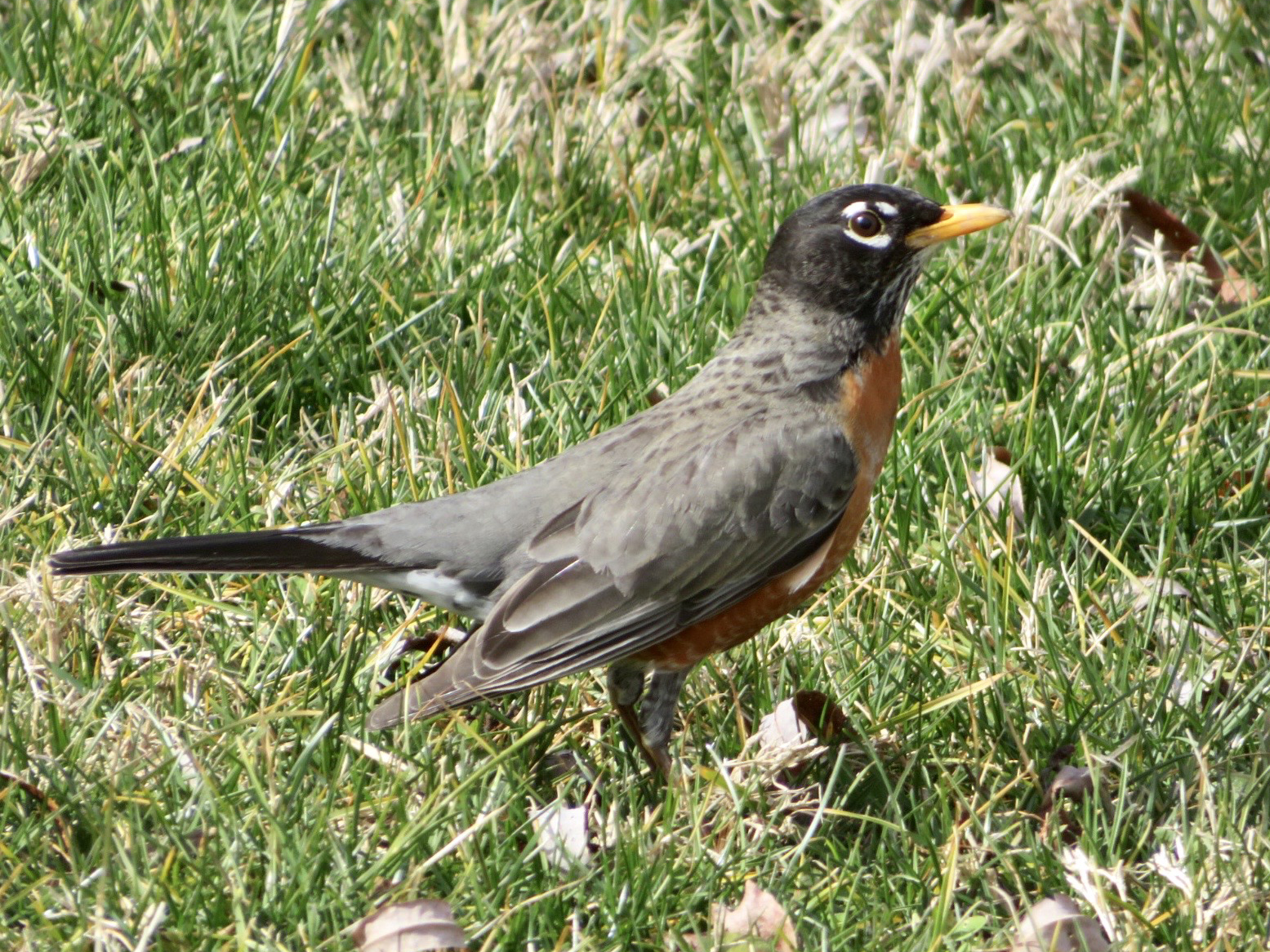 The American Robin is one of our most recognizable birds, occurring in forests as well as back yards. Robins are here in western NC year round, and feed on berries as well as worms.

Along the greenway, you may see a single bird, or large flocks in the Fall. Males and females have similar coloration, with males being slightly brighter. Robins have a dark head and back, and rusty “red” breast. 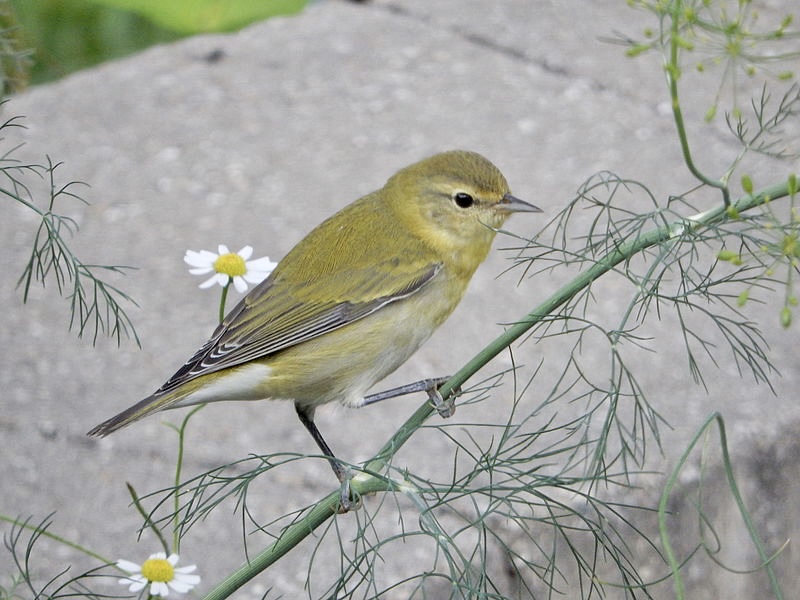 Tennessee Warblers pass through western North Carolina during spring and fall migration. In the fall they appear in larger numbers than in spring, and linger a little longer than other warbler species. Tennessee Warblers spend the winter in the Caribbean and Central and South America.

Warblers, in general, are tiny and active, making them challenging to see and identify. Look for a small, yellow-green bird with a pointy bill, and a streak through the eye. They may be seen foraging in the tall wildflowers such as those in the memorial garden near the kiosk. 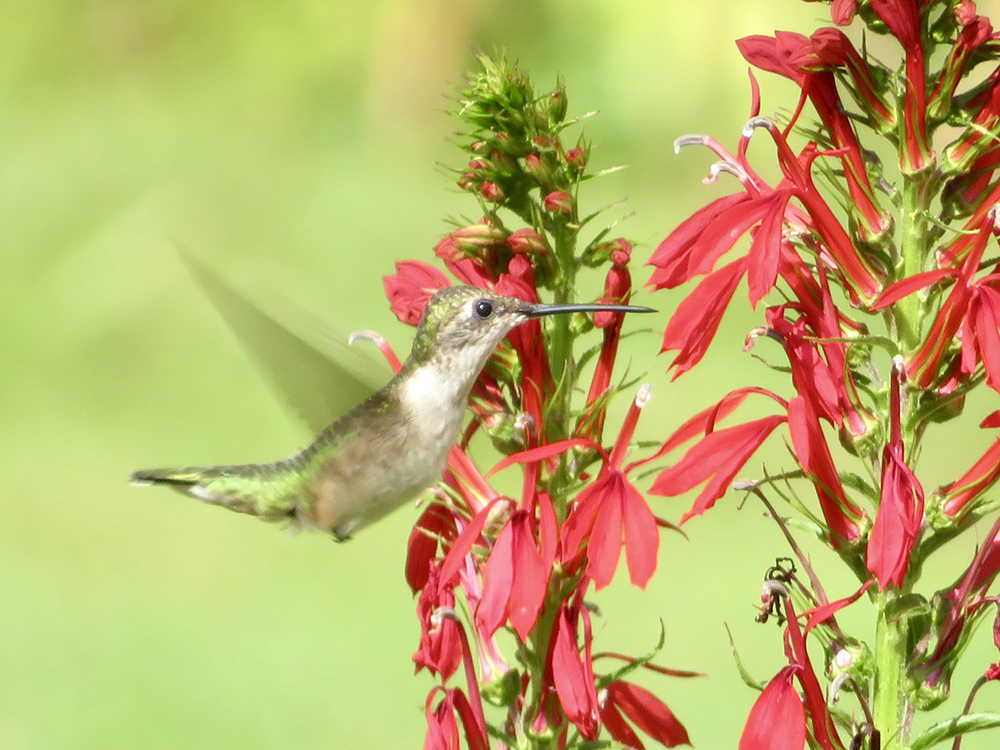 Ruby-throated Hummingbirds have been in our area since April, building nests and raising their young. By September they are actively feeding and preparing to migrate to South Florida and Central America for the winter.

Look for very small, hovering birds feeding on the nectar of the wildflowers on the greenway. You may notice the male’s brilliant red throat when it catches the sunlight.

You can attract Ruby-throated Hummingbirds to your yard by planting wildflowers such as Scarlet Bee Balm and Cardinal Flower. They will also visit feeders that provide sugar water. Mix one part table sugar with four parts water. Red dye is not necessary.

You may spot a Gray Catbird along the greenway after hearing its distinctive call, like the mew of a cat.  Catbirds belong to the same family as mockingbirds and have the ability to mimic sounds.

Gray Catbirds breed in western NC in the summertime.  Look for a dark gray bird with a black cap in the dense thickets.  You can attract catbirds to your yard by planting native shrubs with berries.

Gray Catbirds are rare here in the winter, but a few have been spotted in our local parks during the annual Christmas Bird Count. 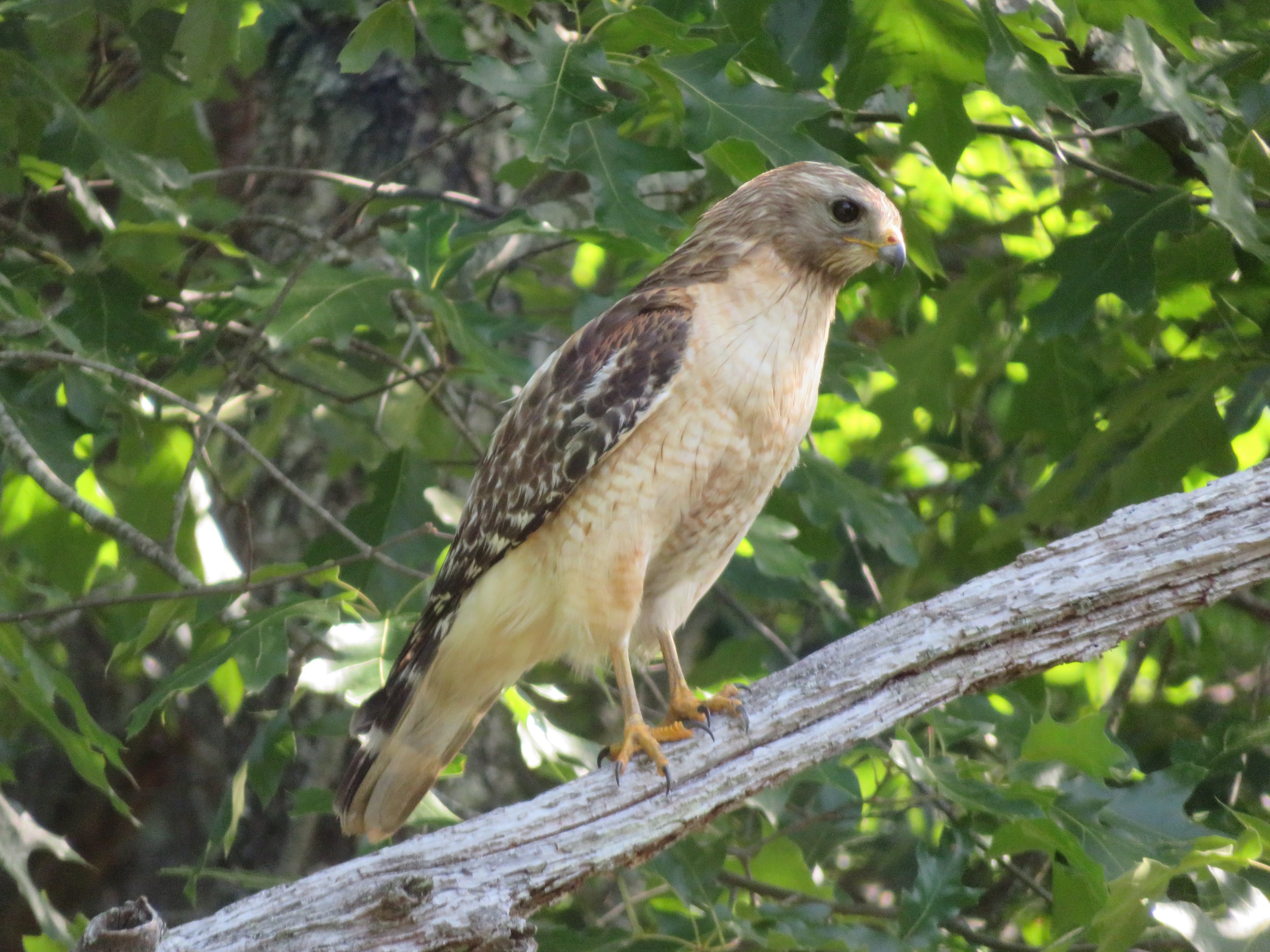 The Red-shouldered Hawk is a forest hawk which lives in much of the southeastern US year-round.  It hunts small mammals, reptiles and amphibians in the woods around the waters edge.

The adult hawk is identified by its orange or peachy-colored breast and strongly banded tail.  It also has red shoulder patches which can sometimes be visible when the bird is resting or in flight.

Listen for the Red-shouldered Hawk calling while at rest or in flight, as it is a very vocal bird of prey. 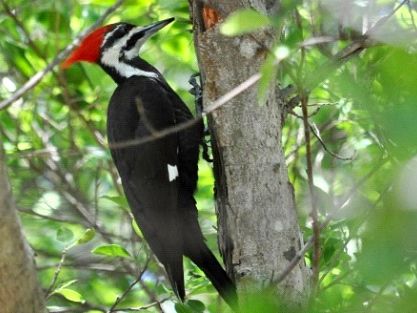 A year-round resident to much of the eastern US, the Pileated Woodpecker is our largest woodpecker in the area.  Listen for it calling or pecking on large trees.

Pileated Woodpeckers are about the size of crows, with black and white plumage and a striking red crest.

These woodpeckers are cavity nesters and excavate holes in large dead trees.  For this reason, dead trees are often left on the greenway to provide sources of food and nest cavities.

Indigo Buntings are returning to the greenway from wintering in Central and South America. They breed in our area and will migrate south again in the fall.

Breeding male Indigo Buntings are bright blue, and females and non-breeding males are brown. Like all blue birds, Indigo Buntings lack blue pigment. Their color comes from structures in their feathers which reflect and refract blue light.

Look for buntings in weedy or shrubby areas. Often male buntings will sing from the tallest perch of a tree. 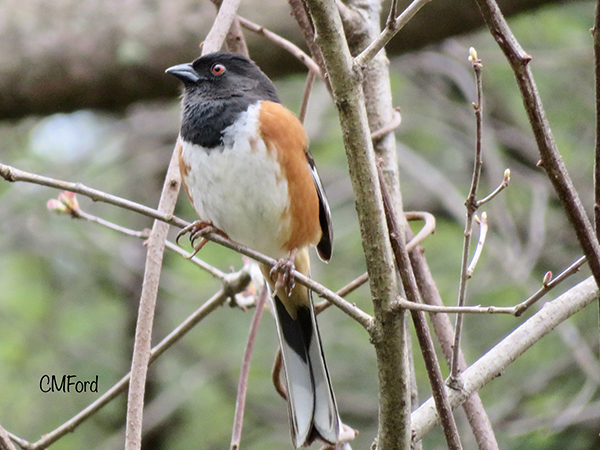 The Eastern Towhee is a large, brightly colored sparrow that can be found on the greenway, usually scratching on the ground in the leaf litter.

At this time of year, the males sing  “Drink your tea”, and at other times call “Tow - hee”.

Males are boldly patterned with black above, orange flanks and a white underbelly. Females have a warm brown color instead of the black.

Towhees are found on the greenway year-round but are especially vocal this time of year. 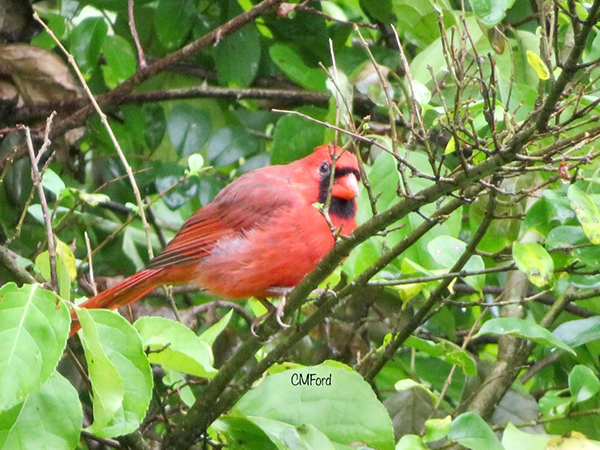 The bright red male Northern Cardinal is one of the most recognizable birds.

Cardinals don’t migrate and are therefore found on the greenway year-round.

Adult cardinals don’t molt their feathers so the males remain bright red all year. The females are a warm brown with red accents.

Look for cardinals foraging on the ground or perched in the trees, singing.